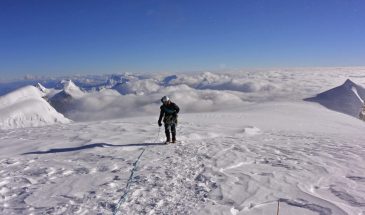 Dominating the skyline above Huaraz is the Cordillera Blanca, the White Mountain Range. Huascaran stands out among the range for its massive size. The highest mountain in Peru has drawn mountain climbers to Huascaran National Park for decades. While not technical, the route is a massive glacier with some objective dangers like seracs and crevasses, so you do need some mountaineering experience. Huascaran is a good one to have in the bag if you collect high peaks! 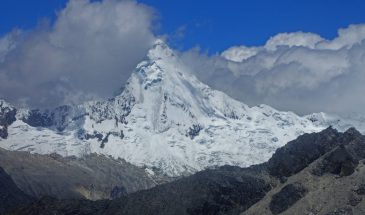 The famous Paramount Pictures logo is a representation of Mount Artesonraju, shaped like a perfect three-sided pyramid mountain. Nestled in the heart of the Cordillera Blanca (White Mountain Range), it is located at the head of the Paron valley. You will enjoy the setting of several 6,000 meter peaks above the surreal turquoise waters of Laguna Paron. The iconic peak is a great technical climb of 800 meters, a “D” on the alpine scale for seasoned mountaineers. 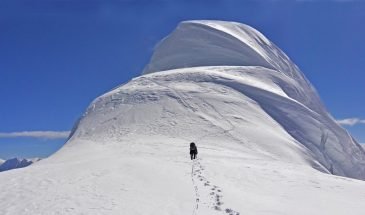 The normal route on Chopicalqui ascends the west ridge, gaining the ridge just below the col with Huascaran Sur, the highest mountain in Peru. This broad ridge is a climbers’ dream. You are able to see most of the 6,000m peaks in the range. Climbing Chopicalqui is very similar in difficulty to Ausangate (Cordillera Vilcanota). You can climb Chopicalqui in 4 days instead of 5 if you are well acclimated. 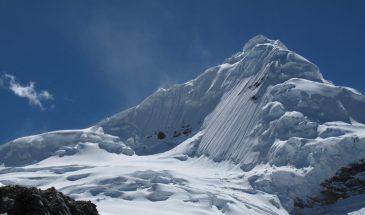 Located at the head of the Ischinca valley close to Huaraz, Mount Tocllaraju is a classic climb of the Cordillera Blanca. It’s a great choice for your first 6,000 meter peak. The north ridge tests you with a few short sections of steeper climbing. But most of the route is walking on a broad ridge with incredible views. 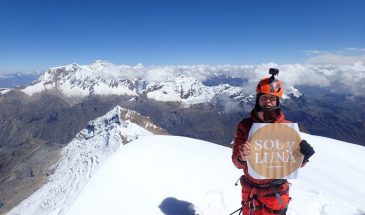 The Ishinca valley close to Huaraz, is the perfect place to experience the Cordillera Blanca for the first time. Also the best place to develop your mountaineering skills.

The summit of Ishinca has panoramic views of the southern cordillera Blanca and is an ideal mountain to acclimate for higher climbs.

Mount Tocllaraju is a classic climb of the range and a great choice for your first 6,000 meter peak. The north ridge tests you with a few short sections of steeper climbing. But mostly you walk on a broad ridge with incredible views all around. 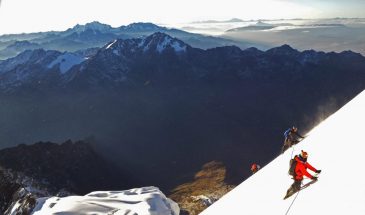 Nevado Veronica pyramid shaped mountain that towers the Sacred Valley of the Incas, it is the highest peak in the Cordillera Urubamba. Veronica is a name the Spanish used, but the Original name in Quechua is “Weqewillka”, which means “sacred tears”. The first ascent in 1956 was led by the famous French mountaineer Lionel Terray. Access to the mountain is relatively easy. You do need some technical ability and experience to climb this peak. Before the glacier starts there is a rope length of rock climbing. There is roughly 450m of terrain steeper than 50°. 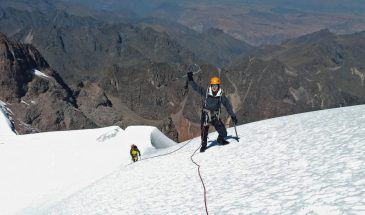 Pumahuanca rises above the city of Urubamba in the Sacred Valley of the Incas. The perfect peak if you are short on time but still want to get up a peak close to Cusco. This is a great climb for beginners, technically easy and a good workout over two days. You will enjoy this side trip from the busy tourist areas to see the Sacred Valley from above! 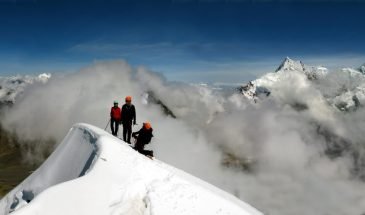 If you have not climbed a mountain before, Soray peak is a perfect choice if you are using crampons for the first time. On the summit you have spectacular views of the surrounding valleys and mountains including Salkantay and Humantay. You can combine it with the Salkantay Trek to Machu Picchu. Or you can climb it as an acclimatization peak before attempting Salkantay. 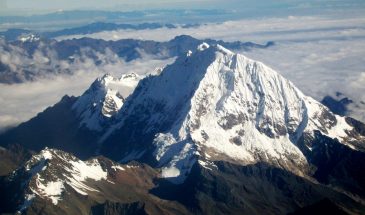 The great Apu Salkantay is one of the more difficult mountains to climb in Peru and is rarely attempted. Salcantay is the highest mountain close to Machu Picchu. The first ascent was in 1952, and until 1988 about eighteen teams had made the summit of Salkantay.  For many years after, no teams were able to climb the mountain. Some people disappeared or died while trying in the attempt, giving this peak its savage reputation.

Since 2013 Sky High Andes has led five successful expeditions to the summit of Salkantay, being the only guides in Peru that are experts on this mountain. The easiest route is the North Face, but you still get over 800m of exposed ice/snow climbing mostly around 60-70°. I have also made the summit by the East ridge which is more difficult. Salkantay is for mountaineers who want a challenge and wish to climb the most sacred of the Andean summits. 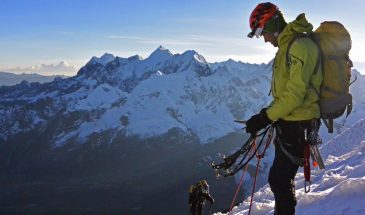 The north face of Mariposa offers you over 8 rope-lengths of sustained snow climbing of 50 to 80 degrees. This mountain has another name: “Santa Catalina” in Andean lore is the oldest of the three daughters of Apu Ausangate. But due to its form like the shape of a butterfly, it is known as “La Mariposa”.  This is an excellent climb for you to raise your level and gain valuable experience on steeper terrain. You can even climb by the north face and descend by the south face directly to the Ausangate Base Camp. 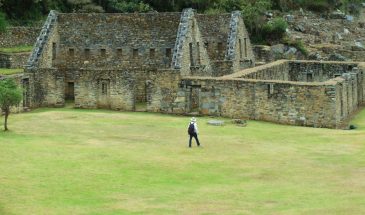 In Quechua language, Choquequirao or Choquekiraw means “Cradle of Gold”. It is another “Lost City of the Inkas” “Choquequirao is the city which demonstrates the inspiring Inca ceremonial center. A city dedicated the adoration of the “Pachamama” the Andean mother Earth “the Apus” Mountain gods and divinities like the water and the elements of Nature.”
Now our focus in this Area is the Andean people, who are living in these amazing mountains, with ancestral traditions, the Inca’s descendants. The Choquequirao trail is for real trekkers who want to get into the remote western Vilcabamba range and still end up at Machu Picchu. 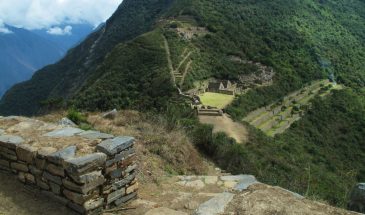 In Quechua language, Choquequirao or Choquekiraw means “Cradle of Gold”. It is another “Lost City of the Inkas”. Choquequirao is dedicated to the adoration of the “Pachamama” the Andean mother Earth, “the Apus” Mountain gods and divinities like the water and the elements of Nature.”

Now our focus in this area is to hike on well preserved Inka trails and see the last stronghold of the Inca after the Spanish took over Cusco. Many Andean people, who are living in these amazing mountains have ancestral traditions from the Incas. We will cross the Vilcabamba mountains from the Apurimac to Urubamba river, visiting the most important cities of the Incas: Machu Picchu, Choquequirao and Vilcabamba.